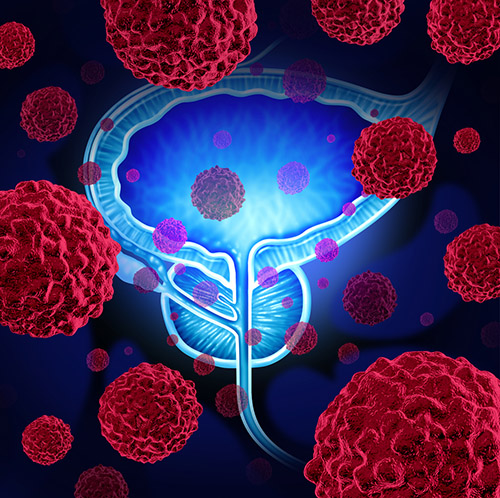 The cause of prostate cancer is thought to be due to the effect of testosterone on the prostate. There are some thoughts that certain foods, bacteria or viruses may be involved. The exact cause remains unknown. We do know it runs in the family, so if your brother or father had prostate cancer, your risk is doubled. The risk of prostate cancer also increases with age.

What are the symptoms of prostate cancer?

Early on there are usually no symptoms at all! The urinary symptoms described elsewhere on this site (Link to ‘Prostate Problems’) most often relate to a benign enlargement of the prostate. Later on with prostate cancer, you can develop urinary symptoms however. Rarely you can get blood in the urine. If the cancer spreads to the bones, you can get bone pains. In advanced cases you might start to lose weight and get night sweats and tiredness.

How is prostate cancer treated?

This depends on a number of variables, but the most important considerations are firstly the age and general health of the patient. The second major consideration is the aggressiveness and extent of the prostate cancer.

If the man is fairly young and otherwise healthy, and the prostate cancer has not spread beyond the prostate, then treatment is aimed at cure. The two main curative treatments are either radical surgery to remove the whole prostate, or radical radiation to eradicate the cancer using radiation, but leave the prostate in place.

If the cancer has spread beyond the prostate and is now incurable, or the patient is too old and/or frail to benefit from radical treatment, then palliative treatment is offered instead. This is designed to put the cancer to sleep, or into remission, so that the man can live out the rest of his natural life with minimal disturbance by the prostate cancer. This is called hormonal therapy, or androgen deprivation therapy (ADT).

In some instances, if the prostate cancer is particularly un-aggressive and the volume of the cancer is tiny, then no treatment is required at all.  The man will instead go onto a vigilant surveillance programme instead. We call this active surveillance.

Down the road the cancer may still need to treated though, if the volume or aggressiveness were to progress. This would be detected as part of the surveillance programme.

This is a procedure used to confirm or exclude a diagnosis of prostate cancer.
It is performed under local anaesthetic in the office. It takes approximately 30 minutes. You can also have a light sedation if requested. You will be placed on the treatment table on your left side and asked to curl up in the foetal position, the same as for a prostate examination.

A small probe will be placed in the back passage. Two injections of local anaesthetic with be administered to make the procedure more comfortable. A hollow needle is then used to take little samples of the prostate.

To reduce the risk of infection, you will be given a prescription for anti-biotic tablets which you must commence two hours before the procedure, and then continue for two days afterwards.

You will be offered a follow-up appointment at the clinic 10 days after your procedure, to go over the results and plan any future treatment if required.